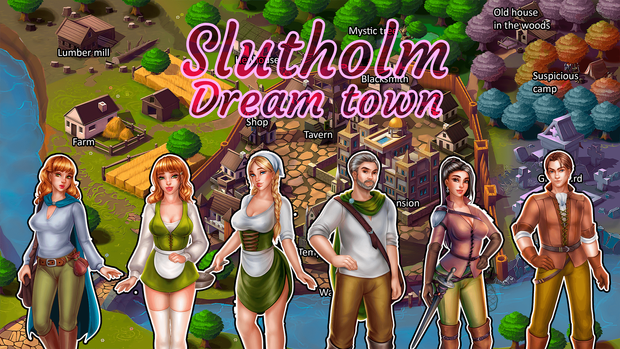 v2
* Character screen added. You can enter the Character screen clicking the ‘man icon’. There you can see all the abilities and attributes and so on about your alter-ego. Also, you can spend Attributes Points there, and see how your character will change.
Please, note, that we’ll continue working on these attributes after the release of this build.
* Quests interface and functionality added. You can find the new icon for Notes and Quests at the top-left corner of the screen.
Quests are added when they are got and disappear when they are full.
Notes are… well, notes that the Player Character takes when he sees/hears something interesting. Each new note is added at the top of the Notes list. You will see the animation of a floating note icon when the new one is added.
* You can’t just pass the night time anymore. You’ll need to find a place to sleep – now you are able to rent a room in the Inn to sleep at night for 1 gold.
We are thinking of an event that when you’ll try to sleep on the streets for the first time, the Captain will take you to the prison, but this could not be a regular possibility – first, you can lose Reputation because of being in jail, second, if you’ll do it lots of time you could be locked in jail for a long time (game over). So please make sure you have enough gold to pay your room rent.
* A new NPC added – Innkeeper. She is a well-known MILF around Slutholm. She is also known to be kind to those who spend enough money at the Tavern – telling more and more rumors, or even… [to be developed].
The tavern is also 24/7 open now.
* To avoid a situation where you spend all your gold and cannot spend night time without a possibility to rent a room, now a temporary ‘work’ added – talk to Gina about it. In the future, we’ll add a few works that will depend on your skills.
* A new parameter – Reputation has been added. You can check it at the Character screen.
Currently, it is under development, as well as the situations and events that will change it.
The reputation would be necessary for triggering some kind of specific events or for unlocking some kind of actions.
For example, Innkeeper will not drink with someone she is not familiar with enough.
* Now, when you get gold, you’ll see an animation of a gold icon floating to the gold indicator.
* Now the Tavern becomes unlocked after your first talk with Talena;
* When you unlock twin’s house location now you see the explanation popup.
* In the Inquisitor’s dialogues all God is exchanged with Goddess;
* Animations now have buttons to control the animation speed and proceed to the next scene;
* Now in Dialogues you’ll see the name you entered at the start of the game instead of ‘Player’;
* Player Character portrait added;
* Popup ‘Press H to hide interface’ added;
* Now at the daytime indicator you’ll see only current one and the next one;
* Now you can always see how much gold you have – even during dialogues;
* Laval is removed from the scene of Tavern when he says he has to go;
* When Talena for the third time asks you to bring cucumbers, the List of Goods is not given to a Player anymore, because she asked for cucumbers only.
* Popup with an explanation of the Daytimes added.
* You can’t start the game with empty Player Name when you are asked to type it at the start of the game.
* Bug when you couldn’t enter the name at the very start of the game fixed.

Unlike Brothel City (city-builder game), Slutholm starts as a visual novel with more gameplay features that will be added in further future. Keep an eye on our development notes on the Patreon page.
The game is still under development, the first test build was released on April, 13th 2020.
If you have ideas or constructive critics – please, tell us.
DOWNLOAD
Win: – – – –
Thank you for sharing the game.
​
&nbsp;
Slutholm: Dream Town
PC, Mac, Linux
Game rating: 5 9

Try to be a smart man and get what you want. And it will be you next second life, there will be a lot of familiar characters that you will met.​ What will you do? Will you be a good man? Will you abuse your power and authority? Try now!