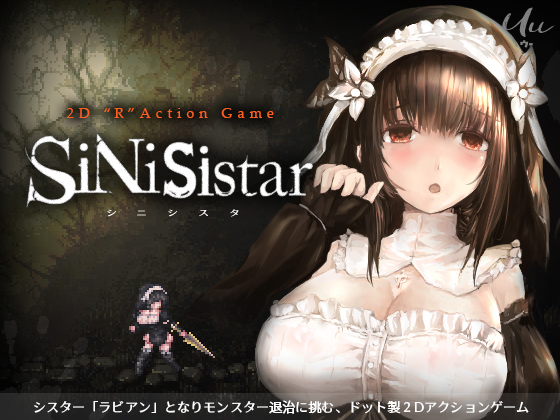 This is a simple 2D action game featuring Rabiane, a sister sent by the Church to exorcise monsters in a cursed land.
The game is centered on themes of masochistic tendencies, yearning for death, as well as despair at being attacked by terrifying beings.
Modern, elaborate pixel art inspired by nostalgic pixel-art games depict every scene, including some post-ending scenes.​

1. You need to change your region date and time format to UK/Japan.
2. Extract and run.

[Protagonist]
Rabiane
C.V.: Haru Amachi
A member of the Church sent to Kessaria, an abandoned city overrun by monsters.
With an abandoned cathedral as her base of operations, she takes on these monsters alone.
Big-breasted.
—————————————-
[Various Monsters and Situations]
About 40 different kinds of monsters attack Rabiane.
If she runs out of energy, she will meet with various “”ends.””
Predation, slime sex, vore, tentacles, seedbed, injection, oviposition, parasite, defects, bottomless swamp, absorption,
petrification, brainwashing, spiderweb bondage, slug sex, crucifixion, hanging, ear-sex,
and various other situations.
Almost all monsters have exclusive animations,
and some of them even have post-ending scenes.
—————————————-
[Plenty of Portrait Variations]
The Portraits will always match Rabiane’s status,
e.g. when she has been debuffed, or her state after death.
—————————————-
[Simple Actions]
You may choose between a swift but close-ranged short sword
and a bow with limited ammo but will allow you to aim and shoot from far.
Use them wisely to clear the stages.
Key configuration can be done by opening the Pause Menu during the game.
Both keyboards and game controllers are supported.
—————————————-
[Stages]
Be it the thick forests or deep sewerage, the stifling dark pixel art of each stage elicits a feeling of despair.
A total of six stages are available as of the release of this game.
DOWNLOAD
Win & Mac:
SiNiSistar
PC, Mac, Linux
Game rating: 5 98

Welcome to the adult world of meetings with your secret wishes. Get this from MEGA or other file hostings right now, unpack, easy install and play this interactive game.

Be a smart man and take what you want. It will be not just simple robots, there will be a lot of interesting persons that you’re totally gonna like.​ What will you do? Will you be a good man? Will you abuse your power and authority? Try now!