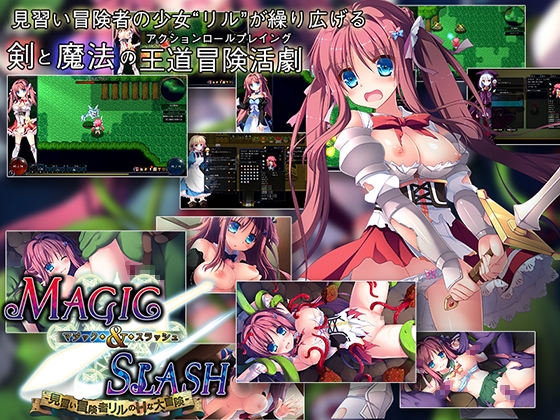 Magic & Slash -Riru’s Sexy Grand Adventure is published on xGames as a part of our best adult games list. Direct download of this sex game is available via few clicks. New and only best games are delivered to you is always here.

LunaSoft’s sword and magical authentic action RPG!
This game is an action RPG that adventures with the adventurer ‘s girl’ Lil ‘by manipulating it.
While using the sword and magic, fight against monsters in the dungeon, collect items and experience values and aim for the boss’s deepest part while reinforcing the character

contents
· Item collection is fun “Hack and slash”!
In this work, we incorporate the elements of “Hack and Slash” so that you can enjoy the character development and item collection to the utmost limit.
The character gets a large amount of accessories in the fight, various random effects are given to them, the probability that it becomes possible to obtain items with a powerful effect increases as the story progresses I will.
Also, if you are lucky you may get rare equipment called “Legendary Items” with special intrinsic abilities.
Furthermore, since the main character ‘Ril’ can switch between two classes of ‘melay’ which is good at sword and ‘caster’ which is good at magic, a wide range of character builds combine the equipment and skills of each class Is possible.· Clothes breakage, dressing change, heterosexuality etc, “practicality” also pat!
We have received a popular system of clothes damage is now alive even now!
If you receive damage during battle, the heroin’s costume will break.
And of course H – scene of heterosexual system which is staple of erotic RPG, which is fucked by monsters when losing battle, is prepared!· Luna Soft familiar element of wearing!
Luna Soft Actual functions that are released according to the degree of engagement by standard players and high-difficulty modes that can be selected after the second week are also of course prepared for now!
As usual, with “Hell” of the highest difficulty level, game balance that breaks the developers’ hearts will seriously kill players.· LunaSoft game is difficult? Easy mode for you!
We responded to the voice saying “LunaSoft game is difficult even with normal difficulty!” And prepared an easy mode which makes it easy to clear the game even in this work.
People who are not good at action RPG with this are safe!■ Story
An apprentice adventurer ‘s girl “Lil” will unfold, the royal road fantasy!The stage of the story is a small village called “Kane village” located in the frontier area.
The road in the vicinity of the village was suddenly transformed into the ocean floor, and a ferocious demon inside the trees sea came to live in the sea, threatening the peace of the village.A youth “Louis” who runs an inn in a village asked for help to his troubled sister, “Tanya”, to find the cause of the accident with a letter.After receiving the letter, Tanya brings the disciple “Lil” and heads to the village of his home where Lewis waits … ….Cast
Ril CV. South Cross
Tanya CV. Makoto Aya
Sophie CV. Yumonobutan
Mimi CV. Ayase Akari■ Planning
em.Original painting
Furukawa
Do not be afraid
Mika Shirahashi
Sakuraba MilariScenario
Mori Horii
Dog madness 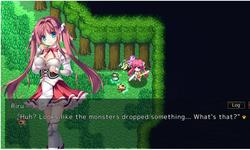 Explore a mysterious forest and battle vicious monsters in Lunasoft’s latest hentai game: Magic & Slash – Riru’s Sexy Grand Adventure, out now on MangaGamer. Magic & Slash is an action RPG with hack & slash combat. You play as Riru, a little adventurous apprentice named Tanya. When she receives a message from her brother, Luis, about strange happenings in Cain’s village, she takes Riru with her to investigate. A villain escaped from prison, and soon after, the village was plagued by a forest that grew on the road at night. To make matters worse, vicious monsters now reside in the strange forest. It then becomes dangerous to leave the house and enter Cain. It’s time for Ruri to put her skills to the test.

In the game, you will collect items to help you in fights against swarms of enemies. Find weapons and outfits for your character to wear, and customize her various gear and skills to suit your playstyle. There’s also a clothing damage feature, where Riru’s clothes will rip when she takes damage. The game is uncensored, so we can watch the heroine’s pussy, or see her being fucked by her enemies. It’s very hard, but this role-playing game is really good.