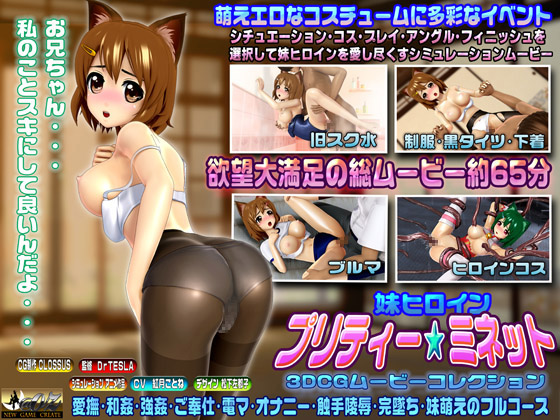 Content of works:
■ Product contents■
[Kanzaki Rina]=[pretty Minet]=[CV:red moon]
Centruminer Gakuen 1st grade[Kanzaki Rina]
2 years older brother [Kanzaki Takeshi]who attends the same school and lives with 2 people.
One day, Lina、
I want to get in the park at night, and I’m being attacked by an unknown monster.
Help the pure white beautiful cat.
The beautiful cat that [Lina]helped was the Princess[Minette]of [Cat Country].
[The land of cats]has been conquered by [asmodian invaders].、
[The monster] then started invading [the human world].
Protect[the human world]from [monsters]、
To save the country of cats, Lina called Minette.
I decided to unite and become [pretty Minet]and fight.
Except for a little problem.・・・
[Lina] who merged with [Minette]
It has become a little H body than a normal girl.
[Lina]and her brother had a secret day that no one could tell.■Simulation movie where you can choose the situation, Cos, position, finish.
In the bathroom, in the school water, in the Japanese・style room, in the uniform, in the physical education equipment room, bloomers, the park of the night is the heroine and the Tentacle insult.■Cute little sister heroine [red moon Kotone] san will perform hot.——————————————————— Here’s a sample.
URL http://atoz.brightone-h.com/cg_pm_01.html———————————————————■product content
● 3D video collection (application)
● Benefits
– Award image (JPEG format 1280 × 720 pixels)■cast
Kanzaki Rina / British Minet CV :red moon Kotone■staff
General director.TESLA
Planning and production BRIGHTONE
Design Satoko matsukami
Video production Colossus
Sound production OLDMARKET 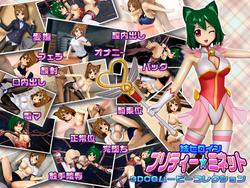 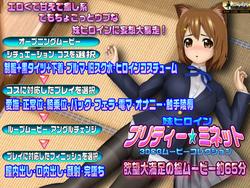 Try to be a smart man and take what you want. And it will be you next second life, there will be a lot of interesting persons that you’re totally gonna like.​ What will you do? Will you be a good man? Will you user your power and authority? Try now!