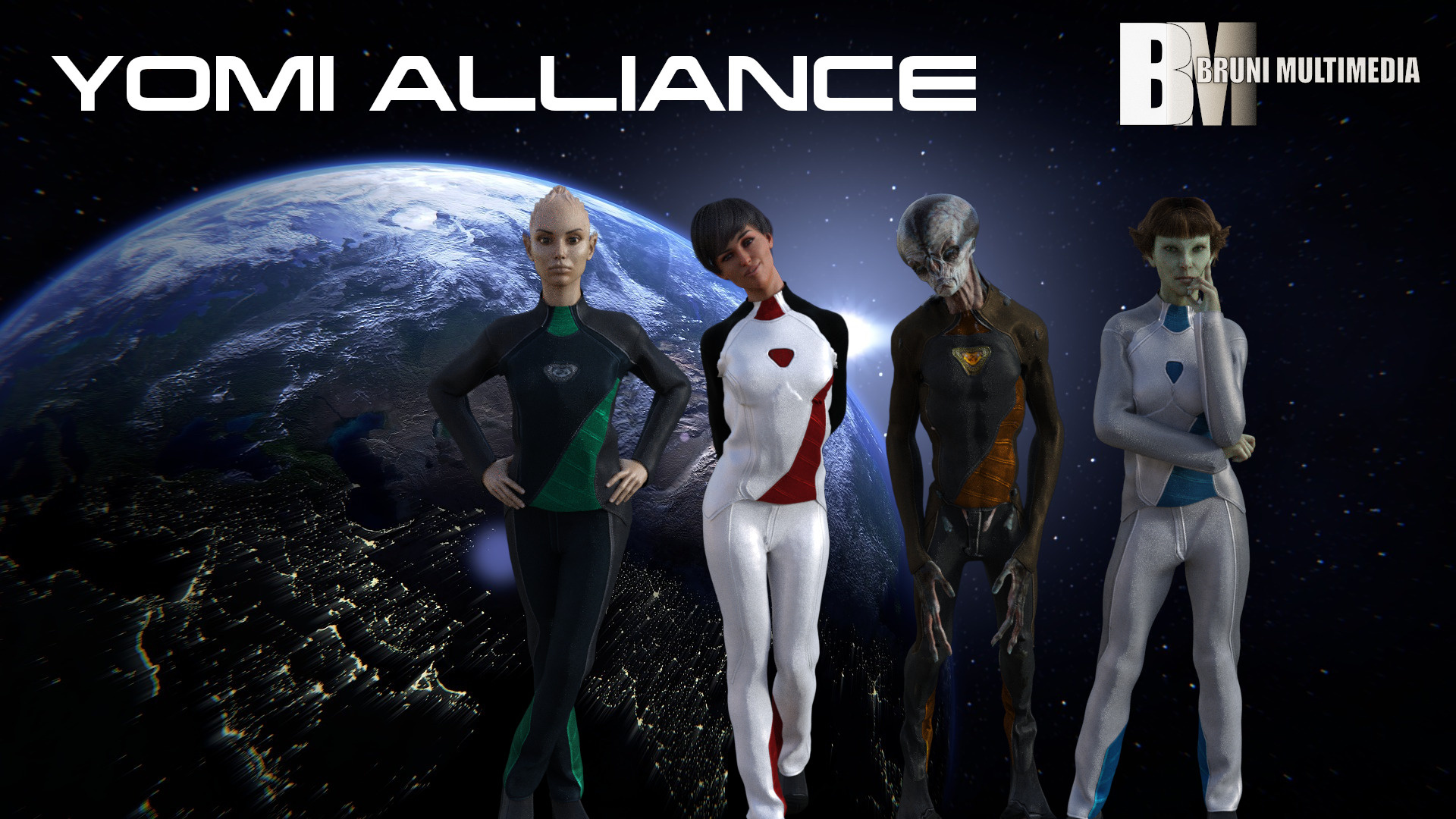 This game will put you into the shoes of a space officer on a fictional future organization called Yomi Alliance, from the name of the planet where peace talkings between the four main inhabitants of this region of the galaxy were made after decades of petty disputes over territory and resources.
Unlike other games the story will change fullly based on your own species and job, making it different every time you play the game. You can discover more about what happened in that space station they attacked, or why a missing zoologist was kidnapped and tortured, if you’ll ever be able to save her!​

Greetings Alliance Officers.
The first Development Log of many (someone might say too many, still I think they’re both interesting and a testament to my commitment to the game) will focus on the RPG elements of Yomi Alliance.
While even in the Main Character had some stats to increase and manage, it was not really an RPG, because skills improvement did unlock some special opportunities, but the story went more or less the same. That was made to avoid transforming the game in a grind fest, something that many adult games around the Internet tend to do a little too often in my opinion.
The focus of Yomi Alliance’s skill increase is to avoid grinding at all costs, because let’s just say it: grinding is boring. There’s no way I can enjoy repeating the same activity again and again until I put some minor increase in my character’s stats or equipment. What we’re trying to do is making the character’s growth as smooth as possible.
That’s why Stats raising will play in the first part of the game: Academy Training.
Players will attend Yomi Alliance’s Navy Academy, a 24 weeks tour of duty where they will learn to be whatever they wish to be. Each different class will attend different classes, like a Science Officer will attend Planetary or Geology classes that Starship Commanders won’t, or Counselors-to-be will attend psychology classes unlike their Security Officers counterparts.
Every week you will choose which classes to attend (if any) and a partially-random related-stat will increase accordingly, or you can focus in increasing your relationship with other Squad Members, or just relax and enjoy the sun. The choice is yours.
Also, when attending a class an in-game event might trigger, meaning conversations, mini-games and even interactive, fully animated consoles to press buttons onto.
What happens when you don’t study enough or study too hard? Of course, the related Stat will be lower than recommended, or very high and this means… a different playthrough. Yes, because every stat-check is partially random as well, and there’s a mathematical calculation based on both Characters’ skills and players’ choice as well.
This calculation determines if an action was successful or not, and it could hinder, for example, an investigation attempt, making the game behave in two very different ways in future missions.
Of course branches of the game are also determined by well-thought choices from players as well, the game won’t be randomized that much. It’s as there are two possibilities:
– Early decisions made in the Academy will determine the outcome during Starship Duty
– Mid-late game decisions made on the starship are made directly and affect the outcome as well
With more than 30 different skills, the storytelling possibilities are countless, and that’s how we plan to deliver an almost fullly different experience based on your very first choice of the game: who are you going to be in Yomi Alliance?

Each job means different stories in the game!
Play as a Navigator and be tasked to navigate between the hazards of a spatial region, escape or intercept an hostile vessel.
Choose to be a Security Officer and you might be tasked to join a boarding party to secure a dangerous space station, or be a Doctor and deal with survivors and injured people…
Every career path will have their own story in each mission!
Available careers in the full game are the following:
Command SchoolCommanderRepresentativeManagerNavigatorHot Shot PilotEngineering SchoolMechanicSpecialistStarship DesignerSystem SpecialistOperations SchoolBasic OperatorOperations ManagerSecurity SchoolSecurity OfficerInvestigatorTactical OfficerCounseling SchoolInterspecies Relationship ExpertPsychologistMedical SchoolAlien SpecialistEmergency MedicDoctorScience SchoolAstrometricsScienceSocial SurveyorPlanetary SurveyorA FULL RPG EXPERIENCE
You will be able to play a character whose species is chosen amongst FOUR different options and three genders (one species is a mixed gender hermafrodit as well!).
This choice will also affect your story as people will react to you differently and even the romance options you’ll be getting will play differently.
There will be 4 different romance options in the game and each character has its own agenda and personality so they are all different each time you play them! The different outcomes given by your choices are literally by the dozen!
DOWNLOAD
Win – Lin:
Yomi Alliance
PC, Mac, Linux
Game rating: 5 2

Welcome to the adult virtual world with your secret wishes. Get this from MEGA or other file hostings right now, unpack, easy install and play this interactive game.

Be a smart man and get what you really want. And it will be not just simple robots, there will be a lot of interesting persons that you will met.​ Will you find love and happiness? Will you be a good man? Will you user your power and authority? Start now!