Description:
Barbaric savages, more beasts than men! Merciless skull crushers and despicable child eaters! The plague of southern reaches!
What else have you heard about orcs? A lot worse, I reckon! These green sacks of rage and muscle certainly deserve every last word of hatred thrown their way. For centuries they’ve been burning human settlements, looting dwarven banks and deforesting elven groves without a slightest hint of compassion or remorse.
However, by a whim of their all-knowing Gods, a small orc tribe is forced to accept one of the human peasants into their ranks.
Gameplay:
The story of “The pale orc” follows a young man named Bratan. Stuck in the very bottom of a tribal hierarchy, his goal is to reach the top and become a Chief.
In order to gain respect of his peers, Bratan has to full numerous Duties around the orc camp, ranging from cleaning tables at the kitchen, watching livestock and sharpening weapons to leading demon hunts, performing shamanistic rituals and forging masterpiece weapons.
Bratan will meet a wild cast of friends and foes along his weary way. Some will become faithful friends, some mortal foes.
However, the main focus of “The pale orc” is adult content, which revolves around training the leader of orcs, Chief Yallara. Main pornographic tags include training and male domination. As the game progresses, Yallara will gradually turn from an unruly, arrogant tyrant into an obedient, submissive sweetheart.
All characters involved in the game are adults.

Hey guys! I made a small, lil game in my spare time, just for you! The first version doesn’t have many sex scenes, mostly character development and setup, around 30 minutes of playtime.
I’m very interested to hear your feedback. Yes, specifically yours! If you have a moment to play and share your opinion, I’d be very grateful.
The Pale Orc
PC, Mac, Linux
Game rating: 5 46 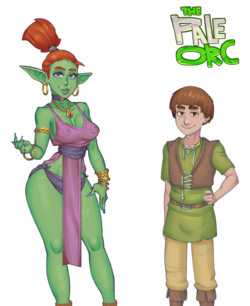 To be honest I am not the type of guy that pays attention to the lore or the actual stories behind almost all visual novel games except it’s close to what I like. The game is pretty much simple and I would say the same as most of the “Renpy” style of a game. However, I find myself kind of annoyed and frustrated on the gameplay side. I know very well how the game mechanics are made, the developer tries to find a more interactive way and maybe extend how the game is. I feel it’s not necessary to make people need to click again and again do the same phase and objectives same again and again. I think 3-4 times is fine but you will do it in tons I mean like dozens of times that it gets boring. There is much stuff that is still WIP so I suggest don’t play the game until the full one is released as your progress may be fruitless. The story has comedy and cartoons art as you may already know from the description.