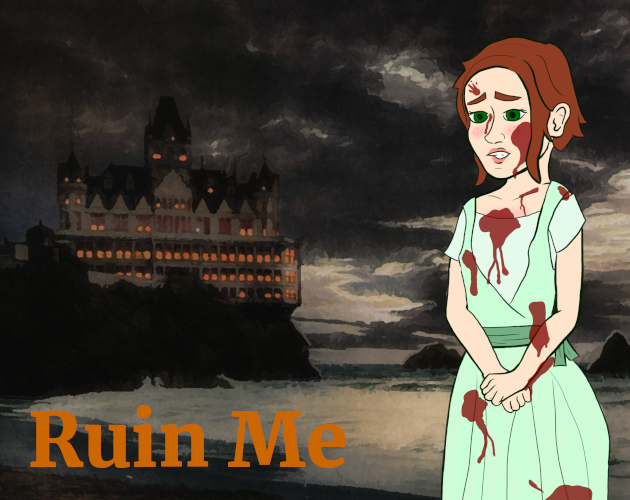 Ruin Me is published on xGames as a part of our best adult games list. Direct download of this adult game is served with just a few clicks. All new games are are always available for you on daily basis by xGames.

In Barrowport, a town of dark mysteries, the young woman said, “I want you to ruin me.”
As a professor of antiquities, you assumed your new position would involve investigating strange artifacts and stories of monsters. You didn’t expect that young Theresa Radcliffe would know your forbidden secret or that she would beg you to lead her down a path of depravity.
​

v0.14.1 Public
The “Vaginal Sex” training sequence, including a new pose for Theresa. This brings her from Permissivity 2 to 3.The “Stimulate Theresa with your hands” play scene, available at Experience 2.A message when new options are available in the change menu due to increased stats.v0.13.1 Public
A new horror expedition, “The Momentary Cabin”, featuring the horror of social isolation, accessible in Act 2 by spending Ken when exploring outside town.
A play scene with Arthur Hitchup, accessible at his bookstore, with an erotic poetry reading.
A full revision of Arthur’s character art.
A change to the default player character first name, selected if you leave the field blank.
An improved menu flow for nomenclature changes.
Minor revisions to Theresa’s facial expression and dress art.
An improved display of stat choices to avoid overlapping text.
An adjustment to the layering of Theresa’s blood art.
v0.10.1 Public
“The Flying Head” expedition, revealing information about the Witnesses of the Stone and confronting an ancient mythological threat. It’s accessible by talking to Pappy at the drugstore during Act 2.The “Naked Walk” play scene, selected by my $5 patrons. It involves some randomness; each time you go on a walk with Theresa, there’s a chance of discovery, usually with multiple potential outcomes. It’s unlocked at Depravity 3.v0.9.1 Public
A new training sequence in Exhibitionism that brings Theresa from Depravity 2 to 3. This includes a new outfit for Theresa.A play scene with Esther where she doms you, accessible by visiting her elsewhere in the mansion once you’ve encountered her once. This comes along with a full revision of Esther’s art.The ability to have a nonbinary gender; characters will refer to you with “they” pronouns. If you have an existing save, you can change your gender at the mirror in your bedroom.Actual implementations of Theresa’s “self-degradation” and “begging” greetings and her “edging” and “orgasm” routines, since they’re now unlocked.An enhancement so that Reminisce entries for training scenes now have a brief summary of the scene.A change so you can no longer train a stat unless other stats are caught up; to start Depravity 2, other stats must be at 1.An improvement so training sequences now notify you that stats have increased when fulld.

A story event involving the Ritual of Agrat, which is available once Theresa’s stats are all at 2. It progresses the Byatis storyline and includes a weird sex ritual!A change to the mirror in your bedroom to give a summary of your gender and appearance. You can retcon your skin color and change your gender there.Tracking for the status of your chest: either you have breasts, or the game will refer to your “chest”. If you have an existing save, women with a vulva are set to have breasts and all others are assumed to have none.The “Give Theresa a Spanking”, “Abuse Theresa While She Gives Manual Sex”, and “Receive Breast Play” play scenes. The lattermost scene is only available if you have breasts.The Strange Laboratory mansion exploration, unlocked by spending Ken once Act 2 has begun. Note that at this point you have a method for gaining Ken faster. This location provides basic anatomy customization.The ability to customize how Theresa greets you, done in her chambers under the new “propose a change” menu. She will now use a random greeting, chosen from the pool you select.The ability to customize Theresa’s nightly routine, done in her chambers under the new “propose a change” menu. If you choose one, she will report on her progress the first time you meet her each day. The orgasm denial option can result in a brief scene if you’re lucky.Nomenclature choices for Theresa’s breasts, your own breasts, and semen. I also reorganized the nomenclature menu under the “propose a change” menu.A brief scene where your basic BDSM supplies are recovered, intended to occur during the Sadomasochism training sequence. If you’ve already finished that sequence, you’ll get the scene out-of-order the next time you’re in the mansion entryway.A change to move the “Additional topic of education” option to inside the “Let’s work on your training” menu.A facial cumshot state to Theresa’s kneeling pose (and an update to the Manual Sex training scenes to use it).A change to make forms of address for Theresa lowercase when appropriate.A revision to Theresa’s kneeling POV art from 0.8.0, to fix some anatomy and perspective issues.

v0.6.1
A new training sequence in Manual Sex that brings Theresa from Experience 1 to 2. This has two new art sets, as well as many more events and branches than any previous training sequence. The art for this sequence has been overhauled compared to the patron version.
An update to many choice menus, making it clearer in certain contexts whether a choice is something you’ll say or something you’ll do.
A fix for a bug where you could revisit Castille before you’d actually met her.
v0.5.1
Initial Release

Ruin Me is a mixed visual novel game with really heavy background elements the lore and story are quite vast for an ordinary game that you might found. The game is really focusing on stories and adventures that stumble upon the main character and pretty much in conquest to solve some stuff that happened within his journey. There are lots of content which I can’t really uncover because the game is just to contentfull to be reviewed and I might be wrong. Sadly the arts isn’t that appealing and maybe need a better rework if you are into visual stuff this is not that good.