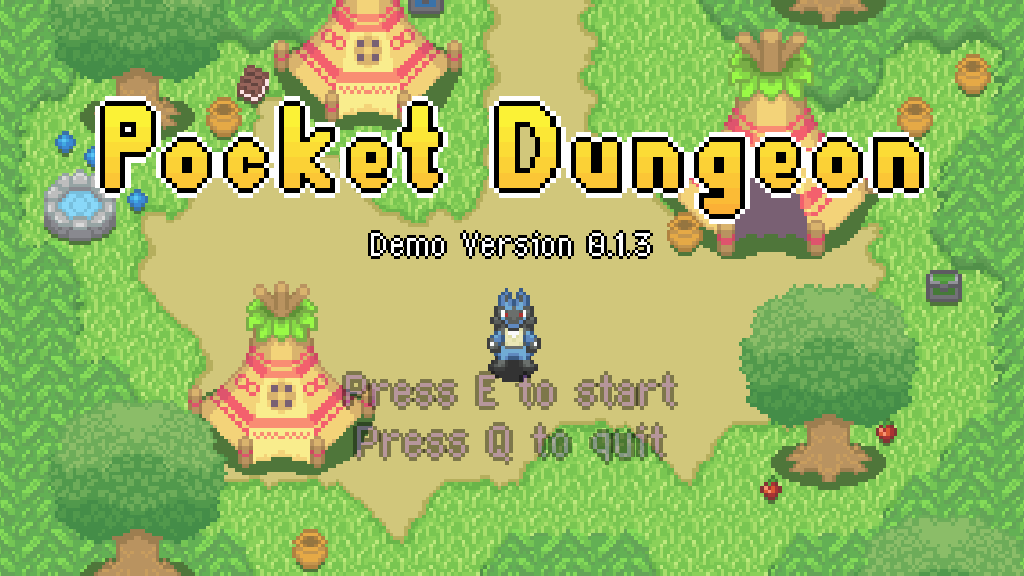 Pocket Dungeon is available here as a part of our best adult games list. Direct download of this game is provided via few clicks. New and only best games are delivered to you is always here.

“Beware of the mysterious dungeons that have appeared all over the region. Something seems to have corrupted them into becoming… a more dangerous place.”
-Notice board at the guild
Pocket Dungeon is a Pokémon game with the dungeon roguelite style of the mystery dungeon games. In this game, you play as either a male or a female Lucario with the goal of going through the dungeon until the 35th floor (current demo) without becoming too corrupted to continue from either losing or submitting to the other mons. The game contains animations of either m/m or m/f (depending on your choice at the start of the game). It also contains several kinks that can all be disabled, preventing anything tied to it from appearing and the scenes are replaced by ones without it.​

v0.1.3
Small update that adds three different difficulties to the game, (hopefully) allowing everyone to have more fun with the game. These difficulties change the spawn rates of different items, traders, traps and enemies while also increasing the enemies’ level scaling.
Playing on a higher difficulty not only makes the game a bit harder, but might also make it easier to search for certain endings as some effects needed for those can be encountered here more often.
Another mechanic added is the Endless Mode that is automatically active once the demo mission of reaching floor 35 is fulld. Every run started after that doesn’t end anymore, most likely making the dungeon generation go crazy after 100 floors or so. Have fun!
In addition to that, a few moves have been slightly altered to be more viable. Submitting now also has an almost guaranteed chance of the enemy accepting your “offer”.
v0.1.2
Initial release

You can always press H while inside of a dungeon to see a small overview over all of the controls.
In the titlescreen you can either use your mouse or WASD for selection, E to confirm and Q to go back. Those same buttons are also used in the menus inside of the dungeon.
General Controls:
W, A, S, D: MovementShift: RotateCapslock: Diagonal movement onlyQ: Speed UpTAB: Open attacksE: InventoryR: Open menusEscape: Open optionsM: Open mapY: Show/hide mapH: Show helpScene Controls:
E: NextEscape: Skip sequenceTAB: Autoplay

In total, there are 6 main animations (each with up to 7 variants depending on the player’s status effects) and over 20 endings.
Current Kinks:
BreedingChastityGender TransformationIntelligence Loss/AmnesiaMind Control/HypnosisOviposition
Pocket Dungeon
PC, Mac, Linux
Game rating: 5 40

Try to be a good player and take what you want. It will be not just simple robots, there will be a lot of interesting persons that you’re totally gonna like.​ Will you find love and happiness? Will you be a good man? Will you user your power and authority? Try now!