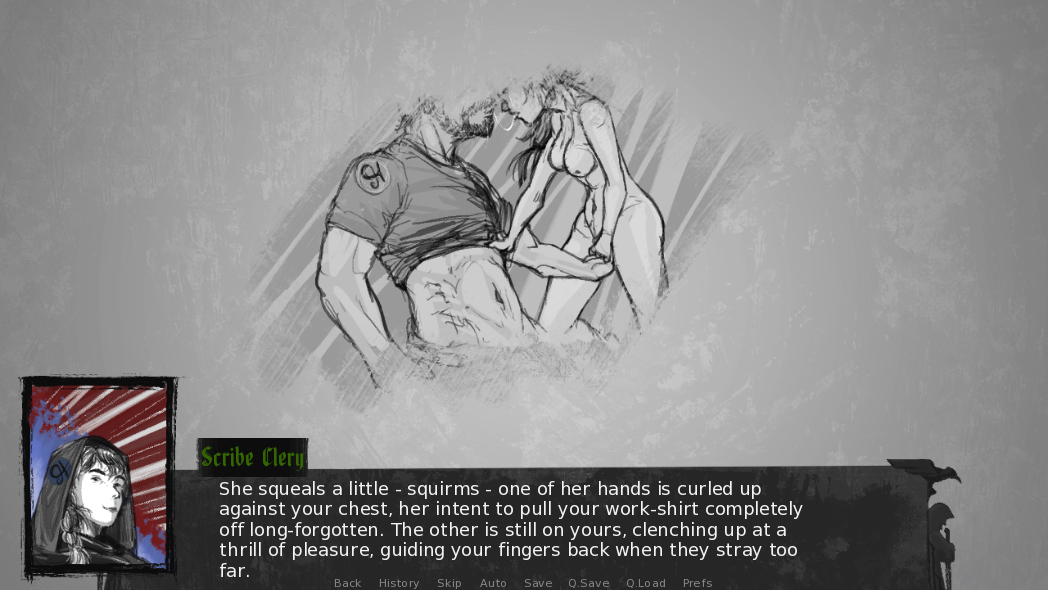 What kind of bureaucrat are you?

A porn parody of a well known setting in the far darkness of the grim future. You’re not a heroic space marine or imperial guardsman – you are a bureaucrat. A mid-level servant of the paperwork and red tape it takes to run an empire of a million worlds. It’s your job to cut through that horrifying mess – resolve disputes, fix problems, listen to angry people. It’s not your job to have sex – but you’ll meet people from every walk of life in the vast Imperium. Lonely guards, bored scribes, women willing to use their body to swing your decisions or just to have some fun in their bleak lives.
Don’t grind! There is not a single moment of grinding. You’re a reasonably high-ranking official of the organization that runs everything – you don’t need money. Your word is better than money. There’s a reason some folks try and bribe you with sex and not fat stacks of cash.
Choose your traits! Are you a schizophrenic empath? A paranoid bureaucratic genius? A nihilistic manipulator? Try and do your job. Endure your horrible empire. Serve the God Emperor. Meet interesting women – and fuck them.
Or just do your job and play literal Bureaucracy Simulator. You can do that. The sex is optional.

This is a story-focused experience. If you’re looking for a quick fap, look somewhere else. This isn’t a –
-just kidding, this is a porn game. But it does have a lot of words for the genre. I hope I found a good balance.
Gameplay:
In the far darkness of the grim future: “Battlemace 69,000” . . .Run around and talk to people. There’s no money, no affection meter, no grind – just dialogue and some options. How you percieve a situation and what you can say is influenced by the traits you choose – the different trait combinations share major story beats, but the tone and possible solution to each scene can be wildly varied.Resolve disputes: talk to folks, learn about the problem, accept or reject ‘bribes’, then make your decision.Meet random people. Learn their story. Commiserate about the misery of living in the Imperium. Bang them?Help people. Hurt people. Get involved in side-stories that far exceed the responsibility of your job.Approximately 1 hour of content.Planned Features:
More locations, more people. The core of this game is running around and solving disputes/meeting weird folks, so variety is life. I have a lot of plans. The Imperium is a big place.A Death Corps of Krijg guardswoman that can’t function in human society. The dozen other noble houses of Crescyt and the bribery they’re willing to resort to get in your favor. Beltline workers, haughty imperial adepts, gutter-trash gungirls, PDF troopers, other nuns (big seller, I think), a mechanicum repairer, a choir member in the local chapel, and on and on.Travel places! There’s a very obvious rail line leading out of the City for a reason. Go to the planetary map, see farms and villages and Emperor knows what else.Leave the planet. That’s the big one. That’s the long-term goal. And after that? We’re talking tau, warzones, pirates, elves, feudal worlds – every imaginable scenario that a mid-level bureaucrat won’t get instantly killed in.I love writing this. I’ve been nerding out over this lore for a long time. The sky isn’t even the limit – we have spaceships.
Imperium Bureaucracy Hero
PC, Mac, Linux
Game rating: 5 0

Enter an virtual world of meetings with your wishes. Free download from MEGA or other file hostings right now, unpack, easy install and play this interactive game.

Try to be a good player and get what you really want. It will be not just simple robots, there will be a lot of interesting persons that you will met.​ What will you do? Will you be a good man? Will you abuse your power and authority? Try now!