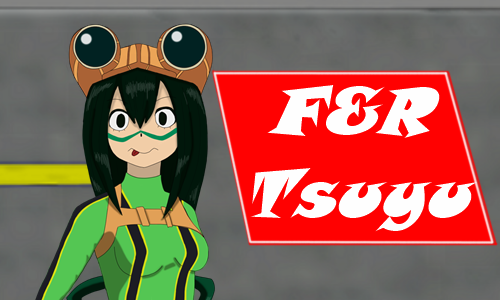 Is adult game included elements step by step fighting in the universe “My Hero Academia“!​

F&R Tsuyu is a parody game for My Hero Academia series. Featuring Tsuyu Asui (蛙あ吹すい梅雨つゆ Asui Tsuyu?), also known as the Rainy Season Hero: Froppy (梅雨入りヒーローフロッピー Tsuyuiri Hīrō Furoppī?), A character from the series. Though the game made using Renpy engine that commonly used for making a visual novel game the creator did utilize it somehow to make the game become an RPG style with turn-based mode, the premise is pretty simple you just have to level up if you are somehow strategic man and know well the mechanics of this game you could skip it and easily finished the game in a minute. After the wining you will be rewarded with the sex scenes. I agree with Hentai Game Critic who commenting and thanks for giving another approach look for this game, the graphic are isn’t that good I mean too rough for the characters, UI, etc.