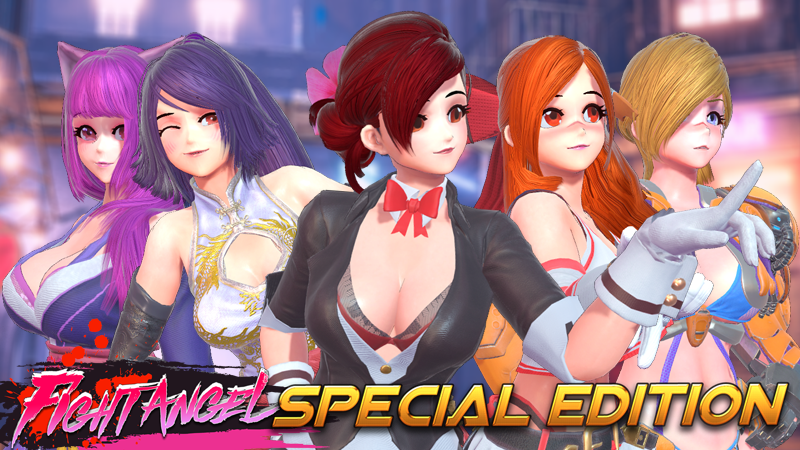 Fight Angel is the girl fighting game with great customization functions with physical effects that make realistic boobs movements and clothing destruction systems. Let’s fight the challenger with your partner! This is a special edition of Fight Angel. Fight Angel Special Edition is the remastered version with the anime cartoon style for the original Fight Angel. Newly custom modeling has been added, and some new content has been updated.​

※ Game Features :
● Classic Fighting System
Inspired by classical fighting games such as King of Fighters and Street Fighter. Easy to learn and play!
● Gorgeous Combo & Skill System
Beginners are easy to learn. Of course, the important thing is the shaking of your girls heart!
● For The Best Girl Fighting Game
Our focus is on the fully custom character + chest swaying + clothes breaking!
● Fully Custom Character Available
All customizable character creation systems, from face to body, from hair style to clothing, from bust to hip, all can be customized with free size, you know it. ( ͡° ͜ʖ ͡°)
● Awesome Physical Effect For Boobs Mania
The new dynamics for the realistic breast swaying physical effect. Even if your character is wearing clothes, it will affect the shape of the moving more authentic.
● The Perfect Clothes Breaking System
It may be the most perfect breaking system among the fighting games, and all the clothes can be broken! (Of course, if you don’t like it, you can turn off the effect in the system option)
● Various game modes!
Currently, story mode, arcade mode and local battle mode, and online game mode have been implemented.
● More Clothes, Items, and Girl Characters!
More clothes and items will be added, and additional character designs are planned.

Enter an virtual world with your secret wishes. Get this from MEGA or other file hostings, unzip, easy install in a couple of minutes and play this adult game.

Try to be a smart man and get what you want. It will be you next second life, there will be a lot of interesting persons that you will met.​ What will you do? Will you be a good man? Will you user your power and authority? Try now!