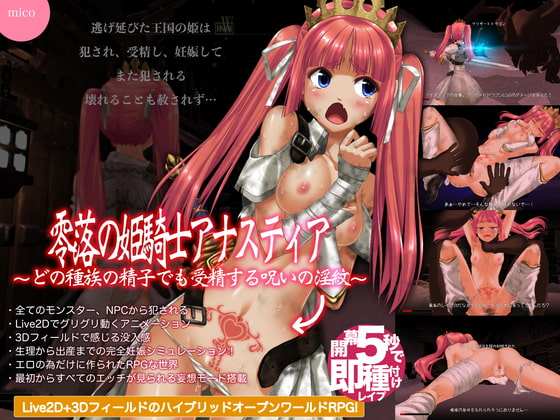 Fallen Princess Knight Anastia- and the curse of impregnation by the sperm of any race is brought to you by xGames as a part of our large adult games collection. Free download of this adult game is provided with just a few clicks. All new games are delivered to you on xGames.

Princess Anastia lived a life of leisure in the Royal Capital.
One day, a rebellion broke out and the Royal capital fell due to the heavy taxes and exploitation by the Royal Family.
Anastia was able to escape successfully, but not before being cursed by a rebel wizard.
She escaped with her life and took refuge in an unknown village; a village suffering from a blizzard and
full of monsters and lecherous men.
Anastia received a “curse that caused any sperm from any race to make her pregnant.”
What kind of fate awaits her?​

1. Extract and run.
Fallen Princess Knight Anastia- and the curse of impregnation by the sperm of any race
PC, Mac, Linux
Game rating: 5 74

Fallen Princess Knight Anastia- and the curse of impregnation by the sperm of any race: screenshots

Fallen Princess Knight Anastia a curse crest that fertilizes sperm of any species is a fantasy RPG in which you play as Anastia. As the king’s fourth daughter, Anastia lived a carefree and oblivious life, expecting little, and not caring, about her future; however, one day his family’s subjects rioted, killing his parents and sisters. Anastia managed to escape, but only after a witch cast a spell on her. Due to the curse, Anastia can now be impregnated by any creature and her menstrual cycle has been sped up to just ten minutes. This curse will bring her much suffering, as she is left alone, hated by the people of her land, and found attractive even by the beasts of the wilderness. Yet she manages to find a town in the snowy mountains whose ruling lords have agreed to help her survive the winter, if she completes certain tasks for them. Fallen Princess Knight Anastia is a 3D RPG. You can accept new quests from the lords at any time or simply explore the city and its surroundings. Completing tasks and killing monsters will earn you gold which can be spent on gear, items, or even rest. Most characters in the game, including townspeople and monsters beyond, will attempt to rape Anastia. She can still fight to defend herself in automatic turn-based battles, but will be mistreated if she loses or gives up. The game contains 30 sexual scenes animated using Live2D. Pregnancy and childbirth are optional and can be disabled at any time in the game’s options menu.