In (unnamed) Camp game you take the role of the leader of a mercenary camp. Your job is to manage the camp by sending your mercenaries into missions to do all kinds of jobs. Every job has its own challenges that are represented in the form of “traits” sending the right team to the job improves the chance of it being a success.
Successful missions bring money, information and maybe captured characters that can be trained, recruited or sold.
Failure can mean the end of a mercenary.​

– Bugfix: white background image in notifications.
– Added experience system
– Added leveling system
– Added leveling menu.
– Characters ready to level have a * in their name
– Added some mission description and images
– Change: Background images from reward now keep their normal aspect with a black background. I need to improve that even more and expand, but the solution is temporary.

– Main menu
– Discord/Patreon/Trello link
– Reward groups
– Image for rewards
– More missions
– Menus beautification pass.(At the moment is images from the web, in the future i will make/buy proper custom made.)

Hello!
I am FMC a software developer that have been playing adult games for a long time. Since the very beginning i have been modding these games, albeit only to change what i wanted and only i saw the light of these versions, and for a long time i have been wanting to make an adult game.
Recently i discovered the game No Haven and while it’s a excellent game it’s made in RAGs a game engine that isn’t created for that kinda of game. And while the dev makes miracle in that engine the game still very, very, very clunky. And it managed to piss me off so much, the engine not the game or dev, that i decided that I will make a game inspired by it but less buggy, clunky and limited. Here is where this project was born.
So my goal is to make a game inspired by No Haven, Breeding Season and Strive for Power.
Because I am not exactly an artist or a writer I decided to make the game highly moddable so people can use the images and stories they want instead of my lame stories and stick figures.
The game still in a VERY early stage, but I decided to make people able to get into contact with it so if they can help me giving feedback in what and how things need to be made to make the game easier to mod.
Latest devblog entry:
I found a writer!
Everyone I would like to present Hameleona. The Writer for Unnamed camp game!
He already wrote some missions, please check out and say what you think. Your feedback is valuable for us! (And yes, I know, we will focus on spicing things up in the near future)
As for the game, now the missions have separated slots where traits work separately. So only the leader of a group needs to be smart while the grunts need to be strong. I didn’t have the time to use it widely but it’s applications can already be seen in some missions!
The system also works for modding, but sadly the training system still not use it. (It’s the goal for the next update)
I changed how the mission chance is calculated. The new system needs a lot of polish but it’s a step towards the feedback people gave. Expect improvements of it in the near future.
I enabled the window size controls. Keep in mind that the game is made with the 1280×720 as base, others ratios might cause issues.
Some rough rebalance in the mission rewards were done, I think now it should be easier to stay afloat in the game. And I added a couple of missions for free in the start of the game.
Sorry for the late release. A couple of bugs appeared at last minute. And if you find any bug or have any suggestion, as always, feel free to contact me here or in the discord.
Consider joining the discord to discuss the game and get early access to beta builds, not sure why you would want that they are all bugged but I appreciate early feedback.
In addition, if you like the game consider supporting us at the Patreon.
(We are still looking for an artist)
PS: Also if you find typos, grammatical errors and other wring problems – come and shout at me in Discord.
-hameleona.

You can send your characters in missions by clicking in “Missions” then the zone you want and the mission you want.
In the mission menu you can see what traits are beneficial and what traits are a burden in the mission, clicking in the characters to the right automatically shows the odds of result of the mission.
Clicking in “End Day” advances time. At the moment all missions take 3 days to full.
Gold/Money
All characters are paid daily, sending them into missions has a cost. If you don’t have enough money you cannot send them into missions.(it will change in the future)
If you reach -1000 of gold you get a game over.
Levels and traits
surviving a mission earn the character experience, after he has accumulated enough experience, at the moment 30, he can level up in the “characters” screen. There you can pick an extra trait for your character. All characters can adquire up to 2 traits by leveling up.(It’s possible to get traits in some missions)
Prisoners
You can sell or train your prisoners in the “dungeon” menu. At the moment you can only train prisoners to be recruited and all prisoners sells for the same price, but it will be changed in the future.
Goal
The general idea of this game is to be a “pokemon” game, where your goal is to make your dream team, with the races, traits and genders you want. Also you have to survive until them. In the future there will be “important” missions but at the moment these aren’t in place.

Look at the gifs below, they are a bit old but it will give you an idea of how it works.
Copy a mission/race/trait and edit as your liking, if you have any doubts hit me up on discord.(Right now things are always changing so i didn’t have time to make a proper documentation)
I recommend you to copy the “Cult investigation” mission.(It has most of the allowed functions for modding)
Added Races
Portrait
Trait
Zone and missions
Camp Game Hotfix
PC, Mac, Linux
Game rating: 5 29 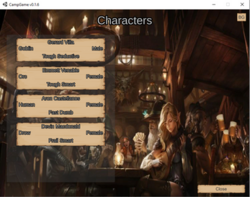 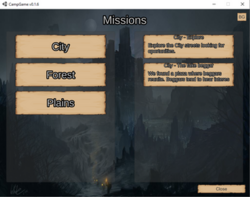 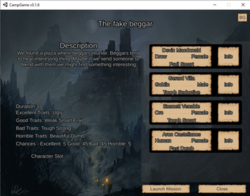 Enter an virtual world with your secret wishes. Free download from MEGA or other file hostings right now, unpack, easy install in a couple of minutes and play this adult game.

Be a good man and take what you really want. It will be not just simple robots, there will be a lot of familiar characters that you will met.​ What will you do? Will you be a good hero? Will you abuse your power and authority? Start now!