Enter an virtual world of meetings with your wishes. Get this from MEGA or other file hostings, unzip, easy install and play this interactive game.

Try to be a good man and get what you want. And it will be you next second life, there will be a lot of interesting persons that you will met.​ Will you find love and happiness? Will you be a good hero? Will you abuse your power and authority? Start now!

Description: :
“Boobs Saga” is a 3rd person stealth action about juicy and beautiful girls and about furries too! This game is a mixture of eroticism, horror and black humor!
Imagine that you’re a young woman with some tasty curves; and it can only mean one thing – you’re a perfect sacrifice to the King of the boobs! Avoid traps, fight monsters or hide from them, solve puzzles, dance. And remember: the main goal is to save your BOOBS!
​

After installing the game in steam, unzip the patch in any folder and run the exe file. Next, the program will do its job and close. Now inside the game in the pause menu (ESC) will be a new item and the ability to remove the tick from it.
OLD SAVES DON’T WORK
Boobs Saga
PC, Mac, Linux
Game rating: 5 13 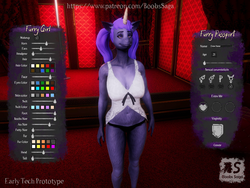 Boobs Saga is a third person action game where you play as a woman imprisoned in the cursed castle as an upcoming sacrifice to the king of boobs. Your task is to escape the castle by avoiding the traps and sneaking around or killing the monsters and demons that roam the castle. The game also features multiplayer with PvP game modes, which the developer plans to expand in the future. Boobs Saga has a comedic tone, with cutscenes and absurd weapons, like guns mounted on lingerie. The player character can be customized using a set of sliders that define their age, shape, race, hair, and clothing. Players can also select their sexual orientation. Sex scenes in Boobs Saga include rape, gore, furry content, monsters, demons, futanari, and other fetishes described by the developer as potentially shocking or surprising.