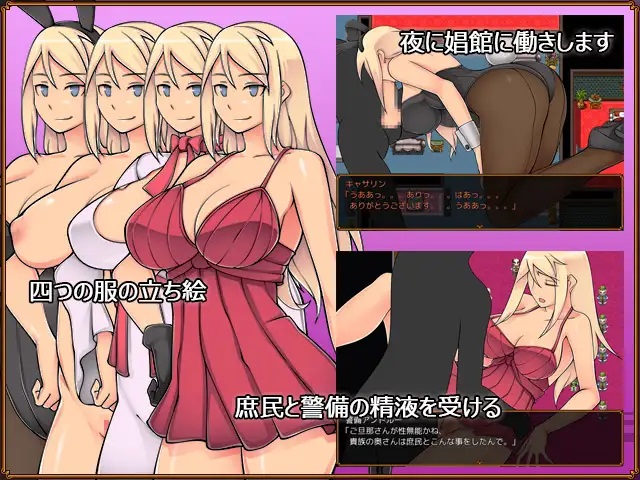 The Empire of the Western Continent started an all out invasion against the states on the Eastern Continent.
Due to the strong weaponry, Emperor Otten III has unified the continent after several fierce battles.
But the Empire found itself in a weakened state as well.
Therefore, the elderly king decided that it is the duty of one of his sons to succeed to the throne.
His strategy: The first one who can give him a grandchild will inherit the throne.​

Status menu isn’t translated because it consists of 19 different pictures and is fullly irrelevant for the game.
Left column: Character Name | Middle Column: Number of sex with that character | Right Column: Pregnancy Value
The pregnancy value is different for every character and goes from 0 to 100. Upon reaching 100 you will get “THE” ending. It is the same one for every character.
Use the bath in your room to lower it by 30 for every character when it goes to high. Just prevent it from going to 100 in order to continue playing.
Please download the RTP for RPG Maker VX if you run into any problem or try running the game on Japanese Locale.
DOWNLOAD
Win:
– – – – –
​
Bitch Princess Catherine’s Manhunt
PC, Mac, Linux
Game rating: 5 72 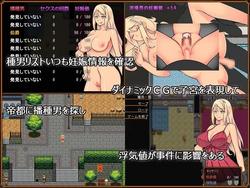 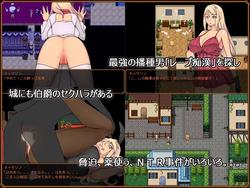 Try to be a good player and take what you really want. And it will be you next second life, there will be a lot of familiar characters that you’re totally gonna like.​ What will you do? Will you be a good hero? Will you abuse your power and authority? Start now!