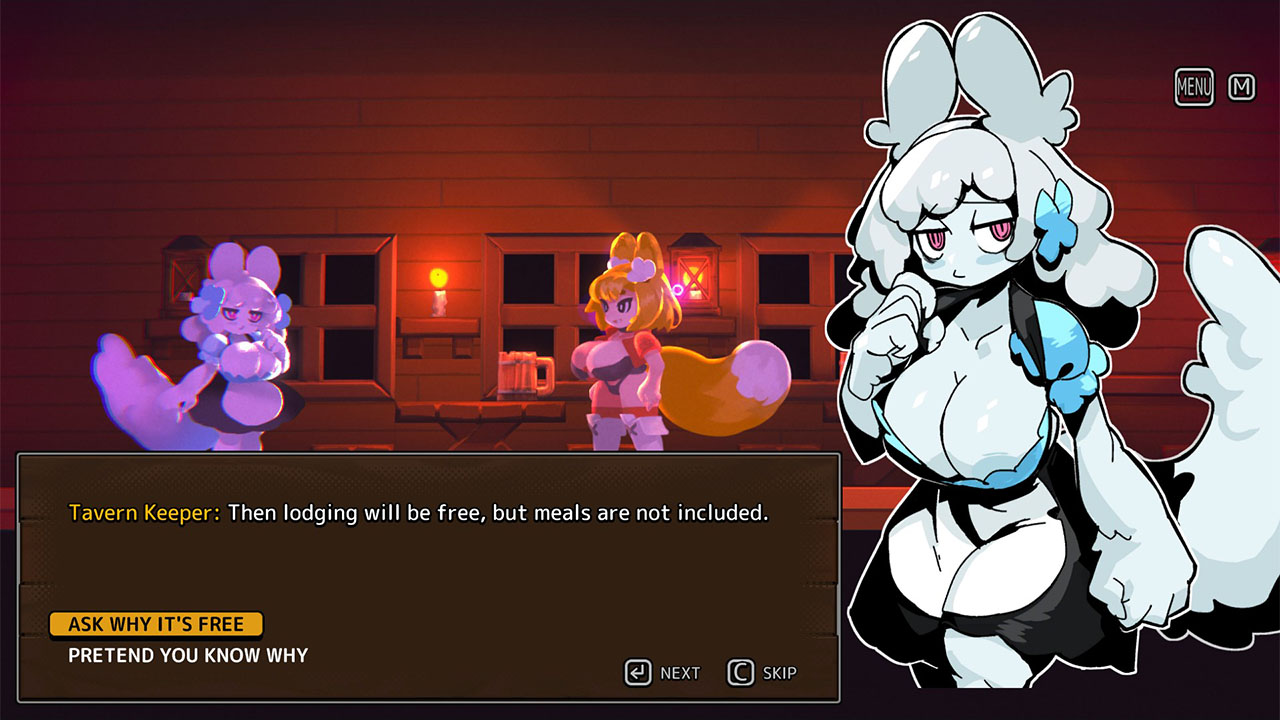 A platformer/RPG/visual novel hybrid with animations partially keyed and partially real-time simulated.
Amber is a beastkin. Like most animals, she mates at a certain time of year when her brain goes haywire and she can’t think of anything but obscene things. This year wasn’t supposed to be any different, but a massive magical incident ruined all Amber’s plans.​

v20220202
Changes:
Travel (new): multiways. Doors and passages support multiple destinations.Travel (new): fast travel. Find different statues of goddess to unlock new destinations, then speak to priestessNPCs (bugfix): the chief will no longer be missing after you go into the woods to finish the intro chapter.NPCs (bugfix): goblin merchant’s caption was corrected.Dialogues (new): added more diverts for Minotaur NPC’s dialogue in the village.Dialogues (bugfix): after interrupting of jumping or shaking animation, character sprite now reset its position instead of staying in the airDialogue System (update): got rid of some legacy codeInventory System (new): shop mechanics, now it’s possible to buy stuffInventory System (new): Goblin merchant now has a shopInventory System (new): Witch now has a shopInventory System (update): inventory UI was rebuilt and updated with new cosmetic features for better clarityData Manager (new): it now performs a compatibility check during loading of saves. If the version of Data manager and version of saves don’t match, the manager won’t load them. Without a warning currently.H Scenes: fulld the Innkeeper’s H scene.Known issues:
Mob Contact Minigame: Keeping pressing [HOLD] button after you fullly filled the progress bar, allows to refill the progress bar while Amber’s animation is stuck at idle.Diary: when you chose to skip the intro, diary doesn’t filled with necessary entries.Items Drop: the drop rate is too generous
v20211231
Minigames:Created minigame manager to control minigames.Adult interactions with mobs were converted into into minigames.Created Innkeeper minigame.Visuals:The animated splash screen when Amber gets horny was removed due to difficulty of adding more animated splash screens.Created 4 more splash screens and created one simple manager to control them and control game states until splash time is out.Created a new shader for background speed effect for splash screens.Dialogues:Text typing speed now can be changed from settings menu.When text is being typed, it’s now possible to break the animation by pressing proceed button.Fixed bug when dialogues were stuck after exiting to the title screen at least once.Triggers:It’s now possible to call any trigger object from anywhere in the game by broadcasting a message with its ID.Triggers now can call generic methods of a scriptable object called ExecutableObject and any scriptable object that was extended from it.Gameplay:After starting the new game player will get an option to skip the Intro chapter entirely.Mobs now can drop a bronze ticket required for minigames with 5% chance.CG (everything that didn’t make it into the update):Prepared pack for Innkeeper’s adult scene (part A).Drew sprites for 2 extra characters.Build:For those experiencing problems with the WebGL version, it’s now possible to download the standalone Windows version.

Known Issues
Trigger System: On level load Player Controls aren’t blocked while transition animation is playing and it’s possible to accidentally trigger level exit before the transition stops.Colliders: The player’s ground detector is too small and it causes player to play the Falling animation when the player is grounded near the edge of a platform.Resolution setting is doing nothing. Not a bug, WebGL build doesn’t support resolution change.Saves don’t work after updating the game version. It’s a limitation on the Itch side and I don’t know how to fix it yet.Improvements
Journal entries are now stored as IDs linked to the text library. In theory, if I need to update any entries in the future, they will be updated automatically.When Amber is naked and fails to crouch, the according sound is played.UI sounds are now controlled by sound effects slider in the settings menu.Bugfixes:
Captions for the library racks work properly now.You can’t give the Chief her package unlimited amount of times now.NSFW option is now properly stored in saves.Teleporter girl starting dialogue was fixed for the forest location.Added text to the empty dialogue that is shown after buying the materials of the second rack (library).

* It was labeled as partial as the pixel art animations are censored with them not drawn in yet by the creator.
Amber’s Breeding Quest
PC, Mac, Linux
Game rating: 5 40

Try to be a smart man and get what you really want. It will be you next second life, there will be a lot of interesting persons that you will met.​ Will you find love and happiness? Will you be a good man? Will you abuse your power and authority? Start now!