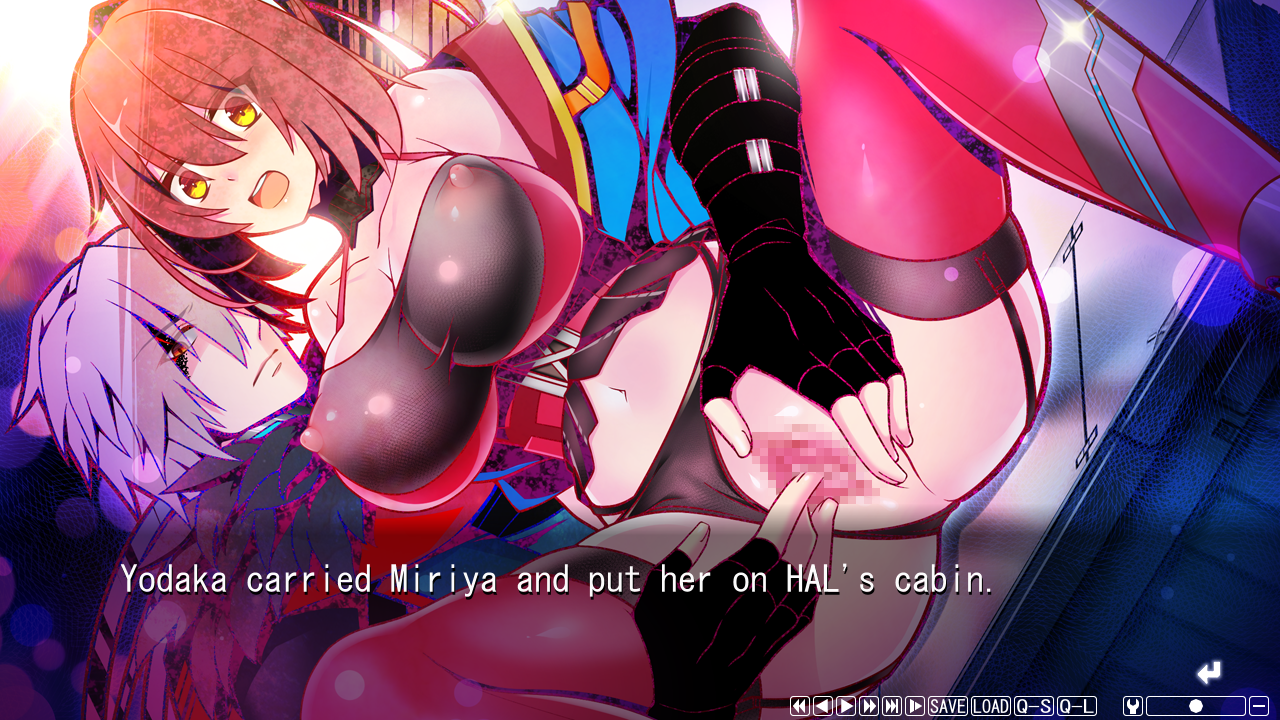 ALPHA-NIGHTHAWK is brought to you by xGames in a list of adult games download. Free download of this game is served with just a few clicks. All new games are delivered to you on daily basis by xGames.

Description:
Bathed in the light of the moon, a giant rose blooms in full glory. It hangs darkly in the night sky, suspended in space some 380,000 km from Earth. With its true name and nature unknowable, humans have taken to calling it “Consuelo.” In Bayshore Daiba City, life goes on in the Red Zone—a lawless slum sealed off and forsaken since a, Thorn impacted the Earth’s surface from space, devastating Tokyo and infesting ground zero with monsters. It is here that STX Space Force pilot Miriya Hakone first encounters one Ichizo Yodaka, a former elite pilot now fighting Consuelo alone from aboard his trusty Battle-SHEEP… A new boy-meets-girl sci-fi adventure series is about to begin!​

GAMEPLAY & FEATURES
Visual novel featuring 10+ hours of space adventure.High-quality event CGs featuring original anime artworkMecha duels, fluffy tails, and pulpy science fictionFull professional Japanese voice actingCHARACTERS
Ichizo Yodaka
Voice: Noboru Yajima
Former military and elite Blue Star pilot.
His scarred face is discolored by red-black marks.
Menacing at first, but caring when least expected.
Second to none at engaging with vast sel energy.
Despite once leading his own elite pilot unit,
he later deserted for reasons unknown.
Now a fugitive escapee based in the Red Zone,
he fights on to protect residents from Consuelo
with Sura, his “intergalactic pruning” Battle-SHEEP.
“Am I a human, or am I Consuelo?
I’m just as in the dark about myself as you…”
Miriya Hakone
Voice: Mako Ayane
A top-scoring STX Space Force pilot, or Silver Star.
With dreams of becoming a Battle-SHEEP combat pilot,
she feels let down by her own innate lack of sel skills.
Average but earnest, she relies on hard work alone.
When Ichizo hijacks her electric SHEEP, HAL,
she traces his steps to a black-market auction house.
Earnest, pure at heart, but largely naive about the world.
“I want to become a bona fide pilot
and help the Red Zone as soon as I can…”
Nayuta
Voice: Shino Amekawa
Neo-fennec no. 888.
Has honey-wheat hair and sapphire eyes.
Gluttonous, spontaneous, and foul-mouthed to a fault.
Seldevice of choice: Handy Chainsaw.
Fled Battleship Baobab to be a slum boss in the Red Zone.
After Ichizo befriends her, she relocates to Lost Eden,
though she has yet to mend her rough-and-tumble ways.
“That’s right, you don’t wanna go there!
The Battleship is a bad, bad place! It’s much better here!”
Floppy
Voice: Botan Yumeno
Loved by all as the selfless housemother of Lost Eden.
A goddess of domestic chores thanks to deft gadget manipulation.
Though a cute pet robot now, she was once an electric SHEEP.
She may be a first-rate mom, but as a SHEEP, she’s scrap metal.
Says things like, “My oh my!” in soft-spoken, ladylike tones.
“Oh, are you sleeping there again?
I can’t imagine you’ll sleep well like that…”
Vanessa Mesquida
Voice: Mahiru Notsuki
A brigadier general with the STX Space Force.
Despite her baby-faced looks, she wasn’t born yesterday.
Tough to be around and a raging narcissist at the best of times.
Treats Gon like a servant, although he never seems to complain.
Once active on the front lines as an elite pilot alongside Ichizo,
she now spends her days hunting down this “disgraced fugitive.”
“I don’t care if you feel bad or not.
What I wanna know is, where’s your apology?”
Gon
Voice: Tsubasa Kuzai
Neo-fennec no. 150.
Fearless and reliable, but loyal foremost to Vanessa.
Unique for his trademark hairstyle and silver fur.
Despite Vanessa berating him daily,
he seems to be more than okay with it…
“I serve Vanessa ’cause I want to, okay?!
I always have… and always will!”
Jean Regulus
Voice: Tetsuto Furukawa
A researcher at the STX Space Force’s R&D Center.
Creator and father figure to all of neo-fennec kind.
Friendly from a distance, but given to icy stares,
hence the moniker “Hatred-Digesting Boa Constrictor.”
Hates Ichizo for nominating a certain young pilot
for the “Honorable Interstellar Plan” of 339 UBE.
Ostensibly oversees neo-fennec population control,
but in secret, he is investigating a 5th-dimensional ghost
on Battleship Baobab said to drift through the library of time.
“I heard you haven’t been eating.
Here, it’s a surprise present, just for you…”
Lunette
Voice: Kumiko Okugawa
Neo-fennec no. ???
A mysterious lady indeed and Regulus’s personal secretary.
Immaculate yet approachable, with the kindest of smiles.
Never seen without her Black Canvas seldevice,
which was given to her by Regulus himself.
Remains calm and composed, no matter her situation.
“Understood. Now searching with the Black Canvas…”
DOWNLOAD
Win
: – – – –
thanks to for the files
​
ALPHA-NIGHTHAWK
PC, Mac, Linux
Game rating: 5 33

Enter an world of meetings with your wishes. Free download from MEGA or other file hostings right now, unpack, easy install and play this adult game.

Be a good man and take what you want. It will be you next second life, there will be a lot of familiar characters that you’re totally gonna like.​ What will you do? Will you be a good hero? Will you user your power and authority? Try now!