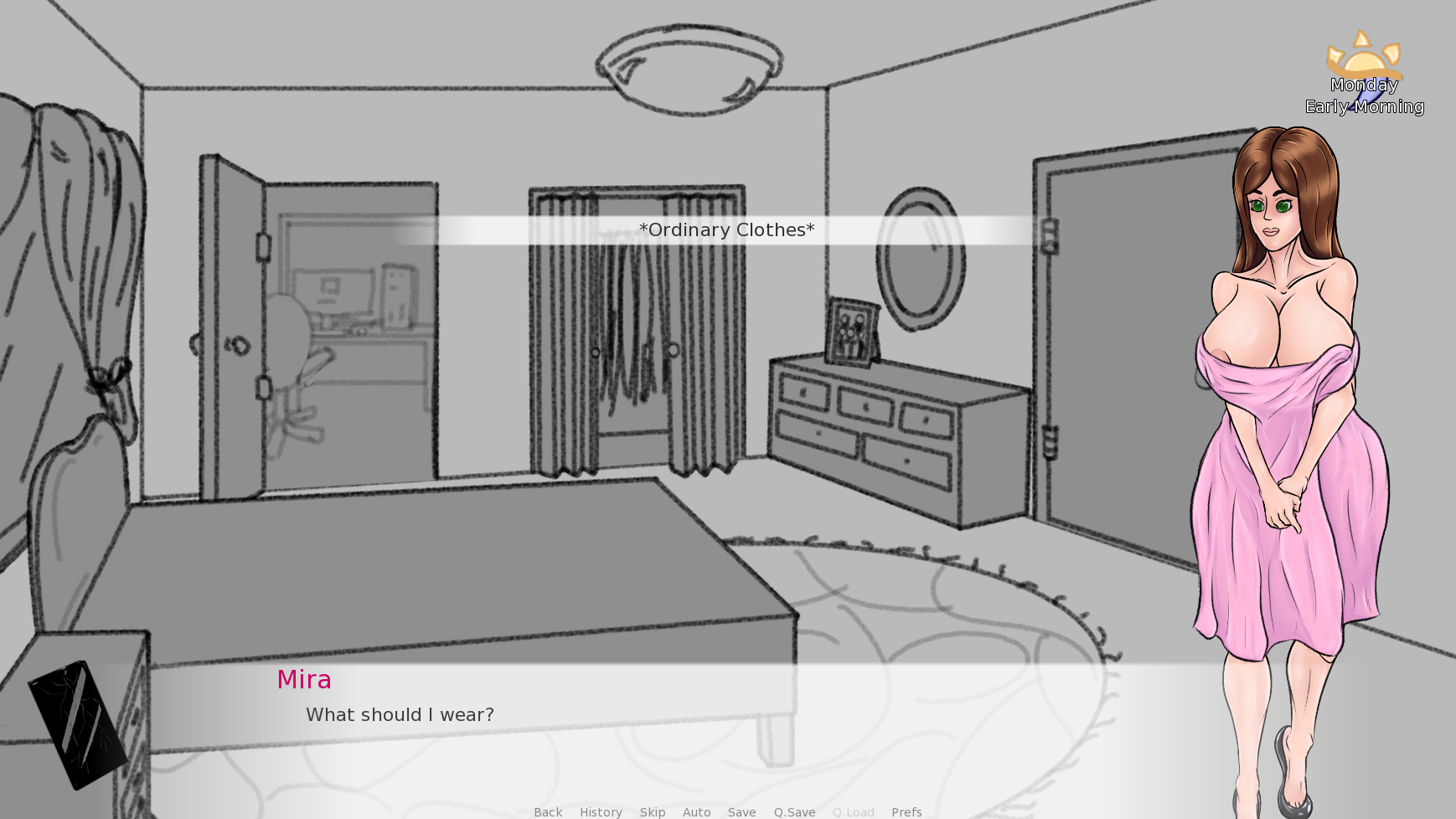 Overview:
A Very Full House
! It’s a game about love, seduction, and corruption, all centered around a MILF-y main character.
Do your best to take control of your household and keep everything under control, by any means necessary!​

This is a very early demo for the game. There will be placeholder items, locations, interactions, and art galore! Almost everything you see will be improved, replaced, or expanded upon during development.
That said, this release does contain all of the code I’ll need to add new content – written events, art, outfits, and so on – right away! Here’s a rundown of the major features I’m hoping this version shows off:
Map Movement – This is pretty straight forward, but it’s obviously still important! The full game will be filled with dozens of locations, each populated with items and characters for you to interact with. The current room images are all placeholders; I’ll be adding in high quality assets to replace them.
Item Interactions – Another simple concept, but just as important. Clickable items are easy to add, and easy to add new interactions to. The goal is to have every location filled with things to interact with! Just like with locations all of the art you’ll see for these are placeholders.
NPCs – Probably the single most important part of the game, NPCs can be interacted with. Every NPC has a collection of stats like Arousal, Control, or Corruption Level which locks or unlocks interactions with them. At the moment only the five main housemates are represented, and those are still using old placeholder art developed for my original prototype. Replacing these with high quality models is a high priority!
Game Mechanics – A Very Full House is more than just a visual novel with boobs in it. You will have to manage your household, making sure you get all of your chores done without driving yourself mad with stress. To do that you’ll have to use the only tool you have at your disposal: your body! Tease your housemates to create Arousal, then make them promise to do chores in exchange for “favours” from you. Do it right and you’ll keep the household from falling apart. Do it wrong and you’ll find yourself stuck in a spiral of corruption and impossible promises!
Animated Live2D Models – The main character MILF is an example of what all character models will eventually look like. With animations and physics both being used you can expect to see plenty of bounces, wobbles, and jiggles from every character!
Dynamic Clothing System – Every character will have a full collection of outfits that they can wear. In addition to that, each piece of clothing can be stripped off separately for maximum flexibility when I’m writing new content. For now the main character MILF has one default outfit, plus a towel outfit used for a single event. New outfits will be added, some of which will be needed to enable specific events.
Modular Smart Phone – You can’t set a game in the modern era without having a smart phone in it! Your phone will act as the main piece of UI, listing out character stats or chores for you. Behind the scenes the entire system is dynamically created, so adding new apps and phone based events will be a breeze! Swappable backgrounds and phone upgrades are both planned! For now, there are just a few basic interactions to prove it all works.
Mod Support – This is less a feature and more a promise. I love any game with an active modding scene, so I want to make sure A Very Full House is as friendly as possible to modding as I can make it. I’ve tried to organize and Patreon all of my code (which is provided unencrypted to save you the hastle) so it’s as easy as possible to read through and modify. Going forward I’ll do my best to design systems so that mods have easy places to hook in new characters, items, and interactions!
If you’ve made it this far then thank you for your interest in A Very Full House! I’m excited to speed up development of the fun parts of the game now that the tricky code and design bits are all finished!
A Very Full House
PC, Mac, Linux
Game rating: 5 24

Be a good man and take what you want. It will be you next second life, there will be a lot of interesting persons that you’re totally gonna like.​ Will you find love and happiness? Will you be a good man? Will you user your power and authority? Start now!