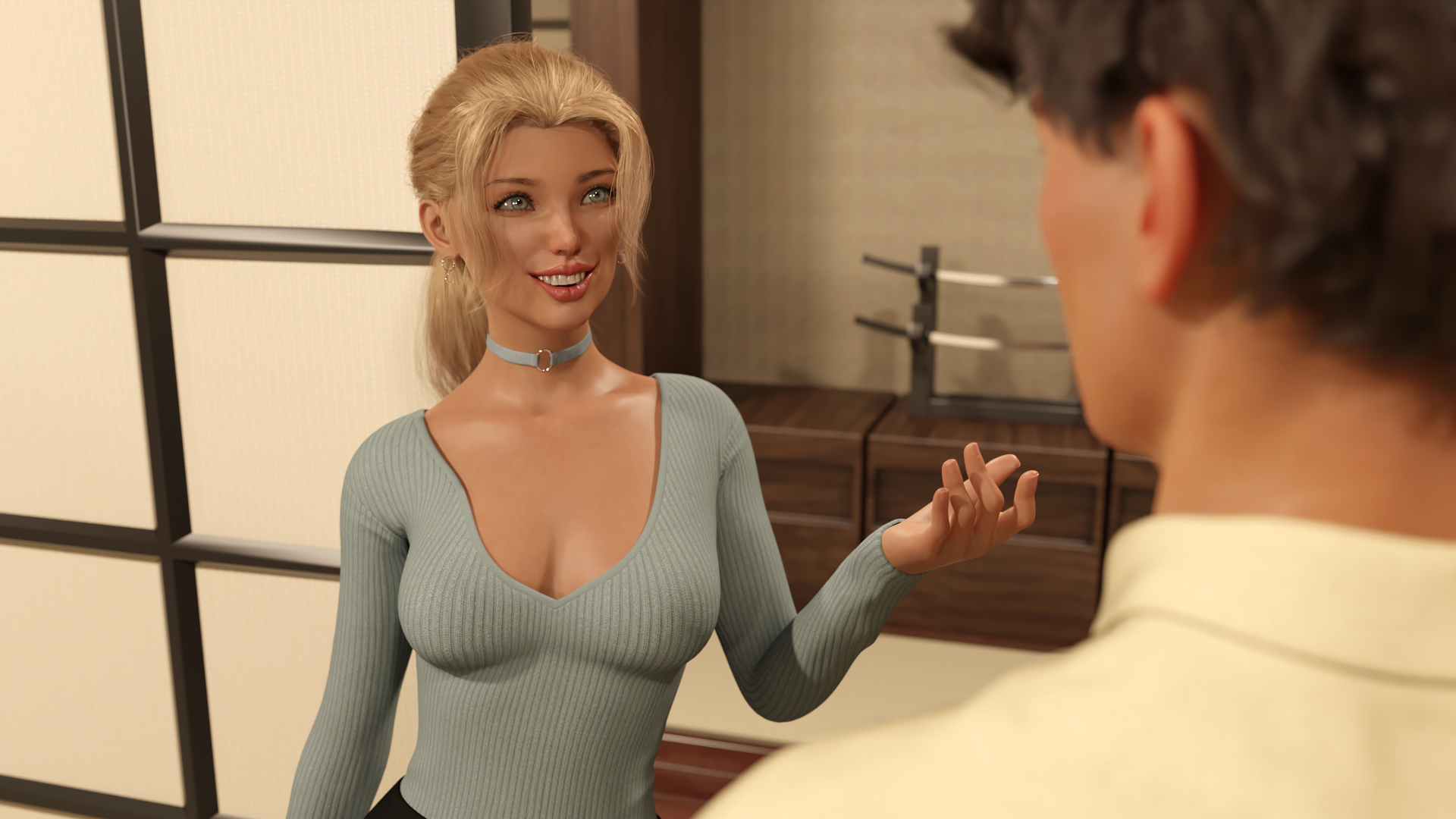 After spending a week vacation with a young woman named Petal, you come home at the request of your significant other.
You and your partner, Rose, have been separated for a year, but have decided to try to work things out.​

Please read.
Raldain discovered that my Daz has been loading alterations onto my characters automatically all the way back since I started working on Avalon. These alterations changed the facial shape of my characters, and greatly increased their eye and iris size. Raldain was able to figure out how to fix the problem, but I’ve only just applied this fix after finishing Chapter 1 of A Moment of Bliss.
What does this mean?
It means that all the way back to my very first game, Avalon, the characters were deformed. I’ve been working with them the best I can, but they were never supposed to look the way they do. Avalon wasn’t supposed to have ginormous eyes, Octavia’s eyeballs were supposed to fit inside her head better, and all of my girls have looked noticeably younger than they were supposed to.
This was never ‘my style’. It was an error in the program I use to make and pose my characters. It also stylized all the characters making them look less human. I’ve basically been working with a handicap for the last two and a half years.
So what happens now?
I’ve decided to release the content I have for A Moment of Bliss. It is literally the full first Chapter. Nothing is missing, I’m not releasing early. Raldain informed me of this issue as I was uploading the fulld build. I’m going to release it because it will take many weeks to update all the renders with the fixed models.
I haven’t decided for sure how I’m going to roll these out. I might just do it one scene at a time. Or three scenes per release. I’ll keep you guys informed. Every picture of the girls moving forward, though, are going to look a bit different.
It is important to me that you all shower Raldain with praise for finding this issue. This improvement will be a huge step in the right direction. Go onto Discord, , and thank the shit out of him. Relentlessly.
Gimme release!
I’m still extremely excited to share this release with everyone. It’s going to be a lot of fun. Be sure to let me know what you think. Also, reviews really help me out. If you find a place that allows reviews, let everyone know how you felt about the first chapter.
This a meaty first release. I might be breaking up Chapters into two pieces moving forward. I’ll always try to have at least a few lewd scenes in every release. I don’t want you guys to have to wait months and months for releases though. If everything goes well, we should see another release around June.
Here ya go!
A Moment of Bliss
PC, Mac, Linux
Game rating: 5 84

A Moment of Bliss: screenshots

Try to be a good player and take what you really want. It will be not just simple robots, there will be a lot of interesting persons that you’re totally gonna like.​ Will you find love and happiness? Will you be a good man? Will you user your power and authority? Try now!