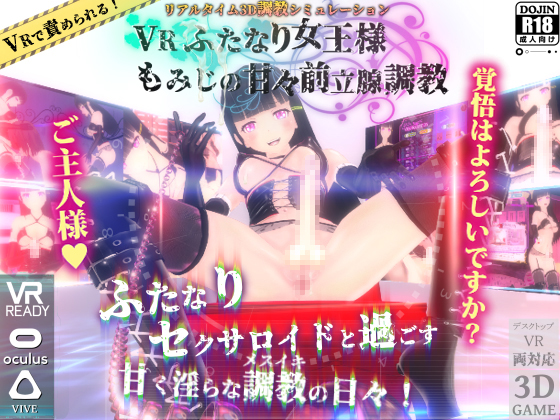 This is a Realtime 3D/VR game for masochist males.

given by your futanari sexaroid named “M001-MOMIJI”.

There’s no problem if you do not have a VR headset.

* Over 90 minutes of sweet and sadistic verbal abuses!

* Japanese voices are lip-synced! (no subtitles)

* Interface in English for easy navigation!

* Breasts, penis and balls jiggle realistically thanks to the physics engine

* Employing “spatializer (3D audio technology)”, you will listen to her as if she is there (only for VR)

* Free touching (only for VR)

* Choose your favorite room out of three choices!

* Dress-up system implemented! You can dress/undress her anytime!

* Can be controlled with a numeric keypad (only for non-VR)

* JOI with dirty words on bed implemented! She continues teasing you until you fall asleep!

* Supports Both VR and Non-VR Playing

* Please confirm system compatibility via the trial version before purchasing.

[Dress-up Function Implemented (for both VR and non-VR)]

You can dress/undress her anytime, including before and during sex.

[FPS/TPS Toggle (for both VR and non-VR)]

In the FPS mode, you see the scenes from the first person point of view.

In the TPS mode, you can move the camera to enjoy the scenes from angles of your choice.

[Auto-camera Mode (only for non-VR)]

In this mode, the camera moves automatically like anime.

By clicking the pad or using the numeric keypad, you can

choose what voice clip to be played instead of random playing.

[Realistic Responses to Your Actions (only for VR)]

She makes various responses to your acts of

touching, kiss and even looking at particular places.

[Automatic Switch between Controller and Hand (only for VR)]

When you get the controller close to her, it automatically changes to

a model of a hand to avoid lessening your feeling of immersion.

Take photos and save your own fap materials as many as you want.

* Location of taken image files (subject to change in updates):

– Non-VR: Under My Picture

The sex scene has for parts:

You can choose when to move on to the next part.

cumdump assault, smegma cleaning, irrumatio and so on and on.

* As a Feminine/Dry Orgasm Supporter (only for VR)

This game is created aiming to suffice three necessary things for dry orgasm:

Excitement(imagination), Relaxation and Concentration on Pleasure.

Thus, this game can be used as an ideal tool for trying to get dry orgasms 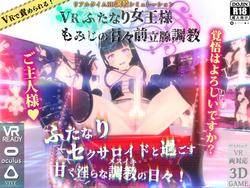 Welcome to the adult virtual world with your wishes. Get this from MEGA or other file hostings right now, unzip, easy install and play this interactive game.

Try to be a good man and get what you really want. It will be not just simple robots, there will be a lot of interesting persons that you will met.​ What will you do? Will you be a good man? Will you abuse your power and authority? Start now!