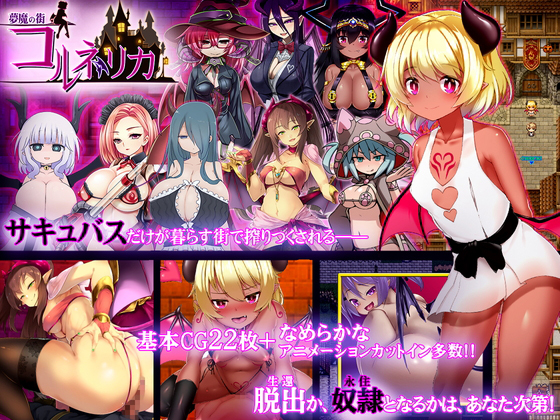 While working at a bar, the protagonist was asked to draw water.

Upon picking up a mysterious stone he found there, he was whelmed by light.

When he woke up, he finds himself in a country of succubi……!

Various types of lewd demons draw near to him. He has to store

a certain amount of magic energy in order to get back to his original world!

What he will eventually face would be escape, or destiny to be a

sperm slave forever… His kismet all depends on your actions!

– Cumsqueezed in intense cowgirl sex by a succubus off-street!

– Cast rejuvenating magic in a church and cumsucked like infantilized!

– Sucked dry of sperm as ingredient of magic potion by a special machine in witch’s mansion!

– Set as a teaching material in sex education class in an academyl!?

– Clung as a body pillow until morning after reverse r*pe in cowgirl style by a mistress of bar!

– Vulgarly given assjob in a tailor!

– The lord succubus sit on face and cumsucks using her tail!

The protagonist of this game. Went stray into a town of succubi.

Has to store magic energy in order to get back to his original world.

Appears to be in about same age as the protagonist. Basically behaves

like an energetic yet naive girl, but sometimes bewitchingly tempts him

as a succubus. Gives various supports for him like letting his “Charm”

off, giving some advice in his adventure and so on. Currently her runaway

is ongoing so living in an unused house located under Cornelica.

The lord of the succubi’s town. Unlike her cute appearance with suntanned skin,

having a child and formally in a married relationship. Her level of magic is

ranked very higher among all succubi in Cornelica, as she is able to

suck one’s sperm only by touching him if she wanted to do so. But seems

to prefer to cumsqueeze slowly but surely while tasting it a lot.

Manages her land day by day with ‘succubusness’ in mind.

A maid-type golem in charge of safeguard. H plays are employed to press suspicious personnel down. There are two versions of Vlasta: old version with awkward

operations and new version with fine verbal functions. Additionally, since their

fuel is sperm like succubi, one may be suddenly sucked of sperm by them.

A succubus with sharp eyes. Well dressed with a swallow-tailed suit.

Though looks a cool beauty, loves doing H things like other succubi. An acrobat.

A mistress of a bar. Basically quiet, seems always unmotivated.

Busty yet a bit timid. But becomes talkative when drunk.

A founder of a certain religious group. Looks very young but the eldest

one in Cornelica. An old friend of the lord. Uses a mysterious spell that

rejuvenates the target one. Many nuns belong to her church. But despite

tender attitude, all in this church are, including Shirara herself, real succubi.

A witch who runs a magic shop. Behaves strangely cheerful.

Looks a bit like a mad scientist. Lives outskirts of Cornelica,

loves doing erotica as a succubus though.

A dancer-ish owner of a tailor shop. has a cheerful personality and

lets her sexual desires go on as a succubus. Almost all the outfits

of succubi in Cornelica are tailored by her.

An owner of a tool shop with a suspicious mood. Her hobby is

Having cat ears and tail. Always grinning for some reason. 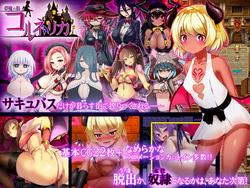 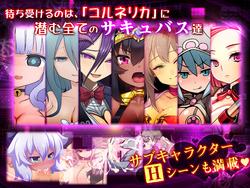 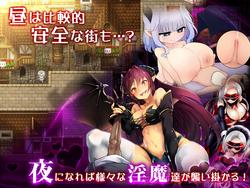 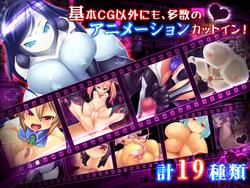 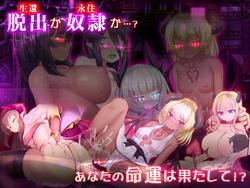 Enter an virtual world with your wishes. Get this from MEGA or other file hostings right now, unzip, easy install and play this adult game.

Be a good player and take what you want. And it will be not just simple robots, there will be a lot of familiar characters that you will met.​ Will you find love and happiness? Will you be a good hero? Will you user your power and authority? Try now!